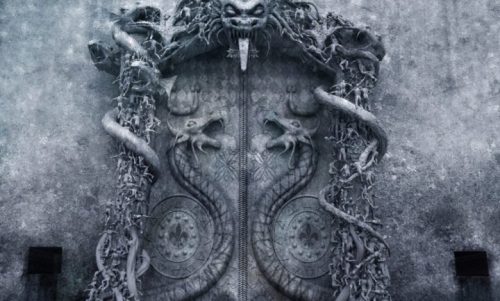 Ed Hollis’s imagines spaces & places which at the present time we can only dream of . . .

From dinner in well-preened interiors, to the lavish decadence of a palace or the friendly fug of the local; we are all perhaps craving other people’s places . . & perhaps even parties. But let’s face it, we’re not going to be invited to any real parties any time soon. It’s the same with interiors: the best ones are frequently the ones we are not invited into or lie behind locked doors – so let’s imagine.

A locked up Treasury & a golden gate to untold riches: The Padmanabhaswamy Temple in Thiruvanthantanapuram, Kerala, India

Forget Fort Knox, or the vaults of Zurich. When in 2011, the government of India ordered the lock-ups of the 16th century Padmanabhaswamy Temple in Thiruvanthanapuram to be opened, they knew what they were looking for – fantastical stories had been circulating for centuries.

They were right, too. Officials found in seven vaults underneath the temple, lakhs of Roman and Napoleonic coins, a golden throne studded with diamonds and statute of Mahavishnu – a principal deity in Hinduism – in solid gold, measuring three and a half feet. There were chairs and tables, vessels and garments, all made of gold, all belonging to the god, and his appointed regents, the Rajahs of Travancore and the priests of the temple.

But there was one door, one lock-up, they never dared to open. And still haven’t. There were cobras carved on the door, stories of snakes within and curses cast by past priests. And even though this was 2019, security measures like these are more effective than a bomb-proof door or a secret Swiss code. The door to Kallara B has not been opened since the 1880s, and as a result, the stories about this particular locked-up interior have grown more and more fabulous. It is the largest vault, they say, and contains treasures valued in trillions, crores, lakhs, and any other incomprehensible measure you can imagine.

Of course it does. Its treasure like all of the rooms I’ve described here, are best enjoyed in the potentiality of their absence. One day, we hope, the light of a reasonable day, may fall upon them. But not yet, we pray, not yet.

Electric Ormulu: static generator, sculpted by Richard Mique in 1788, one year before the French Revolution, for Louis XVI’s garderobe at Versailles.

This room is so locked-down, so interior, that scarcely any of the once millions of visitors to Versailles, ever gets to see it. It was the last room built before King Louis XVI left the palace in 1789 when the the French Revolution kicked off.

It’s buried deep in the poche – a space between walls – behind the scenes of the palace, its only view that of a gloomy lightwell. When I went there, on a November afternoon, we entered the room in complete darkness. Torchlight glanced off exquisite gilding designed by Marie Antoinette’s most favoured architect and interior designer, Richard Mique, and alighted on ormulu grotesques carved by the crafts and trades that so delighted the doomed king.

In amongst this, garlanded with flowers and laurel, and almost illegible, there’s an electrostatic motor, of the sort used by early scientists such as Volta and Lavoisier. Here, hidden deep within Versailles, a century before Thomas Edison revolutionised interior lighting with invention of the light bulb in the the 1870s, this garderobe in Versailles, – arguably the last room of the Ancien Regime – is the first in history to incorporate electricity.

This interior is tiny.  A cabinet built for Louis XVI to escape his courtiers and petitioners – but ultimately not the Parisian mob. Its function?

The only pretext the king could provide for the privacy his royal status denied him everywhere else. It’s called a wardrobe, but that’s a piece of politesse: hidden within the panelling, locked down behind the gilding, there’s another piece of technology that was to revolutionise the interior in the 19th century: a lavatory.

Oh, to be enthroned there.

Edinburgh’s The Waverley Bar nearly didn’t make it when Ian Walker, whose family had owned it since the 1920’s, died in 2016; but luckily the tourist hordes never found it, and as a result, this classic Edinburgh interior survives more or less intact.

This bar is a museum, an archive of bars: an Edwardian interior, shoehorned into a Georgian building (it use to be the site of the old Renaissance city gate), it is furnished with faded fashions from the fifties – that’s the 1850’s as well as the 1950’s – in a wonderful gloomy muddle.

The plastic basket of free crisps is, since the restoration, sadly gone from the top of the bar, as is the electric coal-effect fire that stood in front of the radiator; but the baroque shrine of a horseshoe bar is still there, as are the nautical barrels turned into light fittings, the miniature copper table-ettes, the ancient Fringe posters pasted all over the ceiling, and the tiny stage where Billy Connolly used to perform.

Best of all, this place is wine – no, sweetheart stout – dark on the brightest of days – a fug of maroon leatherette, twinkling brass, and dim mirror, punctuated by bursts of music or story from the Jayne Mansfield of a lounge bar upstairs. In the Time Before – not, not that one, the one in which you could smoke inside – it could have been a Sickert, or an old master, bathed in ageing brown craquelure.

It’s been shut for three months now.. The dust will have gathered in sufficient quantities now to perfect its Rembrandt gloaming. Oh to be locked in there, until the Big Yin comes for us.

Milliways . . the restaurant at the end of the universe

This is an interior that you will never blag your way into – and if you do, you’ll never blag your way back. Milliways was, and will be, the definitive lock-in – ‘one of the most extraordinary ventures in the entire history of catering.’ The chandeliers were, it is true ‘a little bit on the flashy side’ and they would not have been painted, in an ideal universe, in that particular shade of turquoise; but there was a bar, eighty yards long, covered entirely in Antarean mosaic lizard skins. There was a dome bejewelled in five tons of glitter, jewels, sea shells, gold leaf, and all the rest of it, and tables of platinum and ultra-mahogany. The Dish of the Day is the Ameglian Major Cow, which talks diners through its own best cuts as part of an at table service.

And there’s only one Dish of the Day, because there is only ever one day. Milliways was, or will be, the Restaurant at the End of the Universe, and the end of every meal is lit, every time, by the Gib Gnab (that’s Big Bang in reverse).

Along with a galaxy of stellar lock-ins, from the Bistro Illegal to Slims Throat Emporium and the Evildrome Boozarama, these tempting drinking holes along with the Restaurant at the End of the Universe was designed in 1981.

Oh the early 80s, that long-lost alien world! How alien it was: there were no Philippe Starck hotels, no Damien Hirst Pharmacies, no Amsterdam Supper Club, no expensive postmodern eateries called the Canteen or the Kitchen. There were just real canteens and real kitchens, and perhaps, for a birthday treat, a trip to a Wimpy or a Happy Eater.

The Experience Interior, that staple of contemporary life (until a six weeks ago) was just a twinkle, locked in its creator’s eye: Milliways was the first, and greatest of them all. Now wonder, without a prototype to work to, it sounded more like a lounge in Las Vegas than a restaurant.

It was of course, a fiction. The Restaurant at the End of the Universe appears in The Hitchhiker’s Guide to the Galaxy – not a real guide, but Douglas Adams’ great series of four novels about a future present. Written in the late 1970s and first broadcast on Radio 4, it was a sci-fi comedy that has no equal.

Edward Hollis is Professor of Interior design at the University of Edinburgh, and a recovering architect. He is the author of The Secret Lives of Buildings: a collection of folk tales stories about mythical buildings (2009) The Memory Palace: a book of lost Interiors (2013) and How to Make a Home for the School of Life (2016).​ Other projects include working with follies and ruins in Sri Lanka, St Peter’s Seminary at Cardross and Riddles Court in Edinburgh. A recent project focuses on the Indian city of Asansol, built by Scottish engineers in the 19th century.