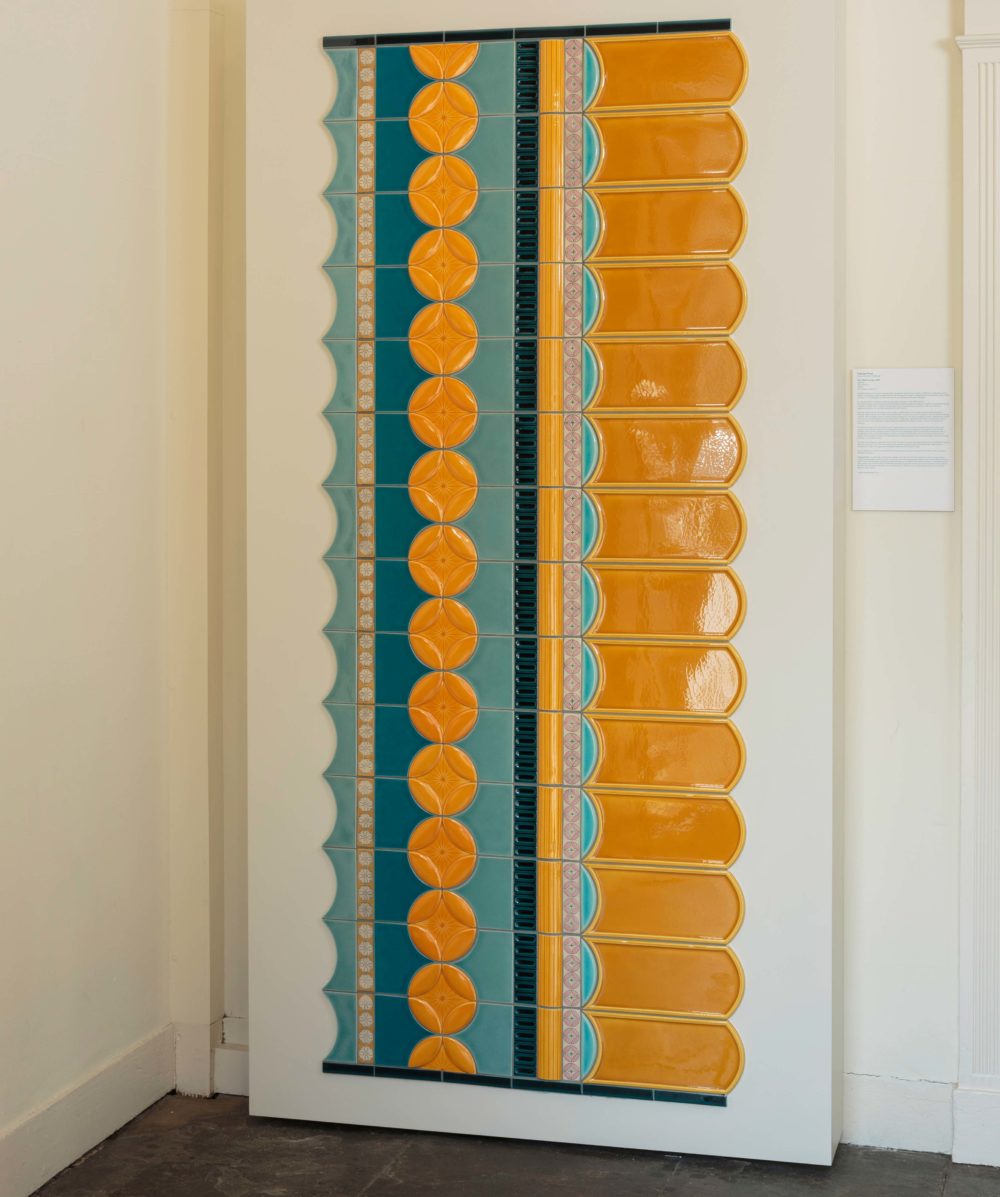 Cultural histories of ornament and decoration frequently inspire Frances Priest’s collections of coloured ceramic objects. Combining a studio-based practice with site-specific projects, residencies and commissions, Priest’s work is rooted in an investigation of both place and its surrounding community of people.

For Design Exhibition Scotland, Priest has recreated a section of The Tiled Corridor.

The Tiled Corridor was commissioned by Edinburgh & Lothians Health Foundation in 2016 for The Royal Edinburgh Hospital. The ELHF aims to improve the physical and mental well-being of patients, staff and visitors by supporting projects not normally funded by the health service.

Working closely with the Foundation and a range of stakeholders, Priest researched historical examples of Victorian tiling schemes, particularly the tiled stairwell of Craig House which formerly housed The Royal Edinburgh Hospital. She considered ways to update traditional tiling for a 21st century hospital corridor. Collaborating closely with Craven Dunnill Jackfield, tile specialists based in Ironbridge, Shropshire who have manufactured ceramics since the 1870s, Priest explored a range of tiling possibilities with Gillian Crumpton, curator at Jackfield Tile Museum.

The Tiled Corridor at The Royal Edinburgh Hospital covers an area of approximately 35 square meters and contains over 2500 tiles. Each tile was designed by Priest and hand-poured into moulds by Craven Dunnill Jackfield, with a further 300 tiles made by hand in Priest’s Edinburgh studio. The tiles are earthenware with a crackle glaze with many of the shapes inspired by Victorian tiling schemes with motifs drawn from fruit and flowers. The moulded surfaces of the tiles allow the translucent glaze to pool and create depth and tonal change, creating a rich tactile surface.

The tiles were installed in December 2018 across two sites, the Royal Edinburgh Building and the Robert Fergusson National Brain Injury Unit. The commission was overseen by Becky Brazil, Royal Edinburgh Hospital Arts & Greenspace Project Manager and installed by Peter Navratil of Recraft Tiling.

We are grateful to Craven Dunnill Jackfield for their generous support in showing The Tiled Corridor at Design Exhibition Scotland.

Frances Priest lives and works in Edinburgh. She is a graduate of Edinburgh College of Art, BA Hons & PGDip Ceramics. Over the past 19 years, Priest has developed a studio practice in ceramics with work represented in public and private collections both in the UK and internationally, including the National Museum of Scotland, Fitzwilliam Museum, Cambridge and the V&A, London. Her work has been shortlisted for numerous awards including European Ceramic Context, Wesley Barrell Craft Award and The British Ceramics Biennale. In 2018 she was invited to participate in Homo-Faber – Best in Europe, Venice.

Cultural histories of ornament and decoration frequently inspire Frances Priest’s collections of coloured ceramic objects. Combining a studio-based practice with site-specific projects, residencies and commissions, Priest’s work is rooted in an investigation of both place and its surrounding community of people.