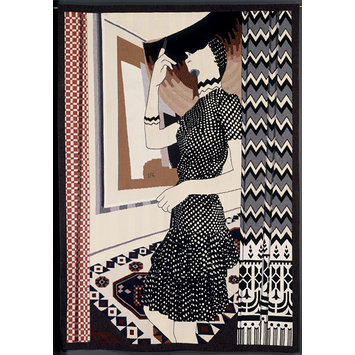 Born in Edinburgh in 1931, Archie Brennan, is for many, the world’s most influential 20th century weaver. At the age of 16, he became an apprentice at Dovecot Studios, then known as Edinburgh Tapestry Co and based in the Edinburgh suburb of Corstophine.

He went on to study both in France and at Edinburgh College of Art, and by way of being an outstanding bodybuilder — he was Mr Scotland in 1954 and trained with fellow bodybuilder & later actor, Sean Connery – he became an adventurous, brilliantly exploratory and sometimes irreverent artist.

Friends with Leith-born Eduardo Paolozzi, his work has the exuberance of Pop Art & true singularity in its medium of tapestry. Brennan become artistic director of Dovecot Studios in 1964 and for the last 30 years of his life he lived in the States. He died in 2019.

To celebrate his life and share the brilliance of his work with the world, Dovecot are presenting an exhibition of Archie Brennan’s work from 26 April to 30 August. The exhibition is funded by monies raised by Dovecot in partnership with the Art Fund.

I just don’t understand why Archie Brennan’s work is less well known than that of his contemporaries.  I can only attribute this oversight to the fact that his chosen medium is tapestry weaving. Brennan was a master weaver, however it is the combination of skill with permanence of subject, wit, humour, and a personal panache that gives his work a poised signature, unlike that of any other artist.

Archie Brennan was director of Dovecot Studios when he employed my mother, Elizabeth Radcliffe, straight out of school, on the recommendation of her art teacher. Archie, and the Dovecot, opened my mother’s eyes to art and design and the world of printing and tapestry weaving. Accordingly, he has also had a huge impact upon me.

My father lived in the south of England when I was growing up in Edinburgh. For school holidays my brother and I would travel to see him via Edinburgh Airport and I can remember Airport (People Waiting), commissioned by BAA in 1977, hanging on the wall at Turnhouse. More specifically, it hung in the smoking area, a sign of the times.

I would look at the three central protagonists of this monumental tapestry and wish that I looked like them. In all honesty, I don’t recall noticing the peripheral male figures in the tapestry at the time. As an adult nothing has really changed – I still marvel at the timelessness of the demi-goddesses depicted in Airport (People Waiting) and wish I could join them on their travels.

For those who didn’t see Airport (People Waiting) in situ, this poster captures the glamourous women in their full waiting room glory. The tapestry is missing. It was last seen in BAA’s Edinburgh offices circa 2012. If anyone has any information about its whereabouts, please contact Dovecot Studios.

For this set of five stickers, I have reproduced Airport (People Waiting), as I remember it at the age of eight, with an accompanying atmospheric fine spray from an atomiser of perhaps, Madame Grès’ Charbouchard. Forever learning about Archie’s oeuvre, I was charmed to discover that a sticker inspired by his tapestry Old School Tie, 1971 is in fact the tie of my old primary school, that Archie’s daughters also attended.