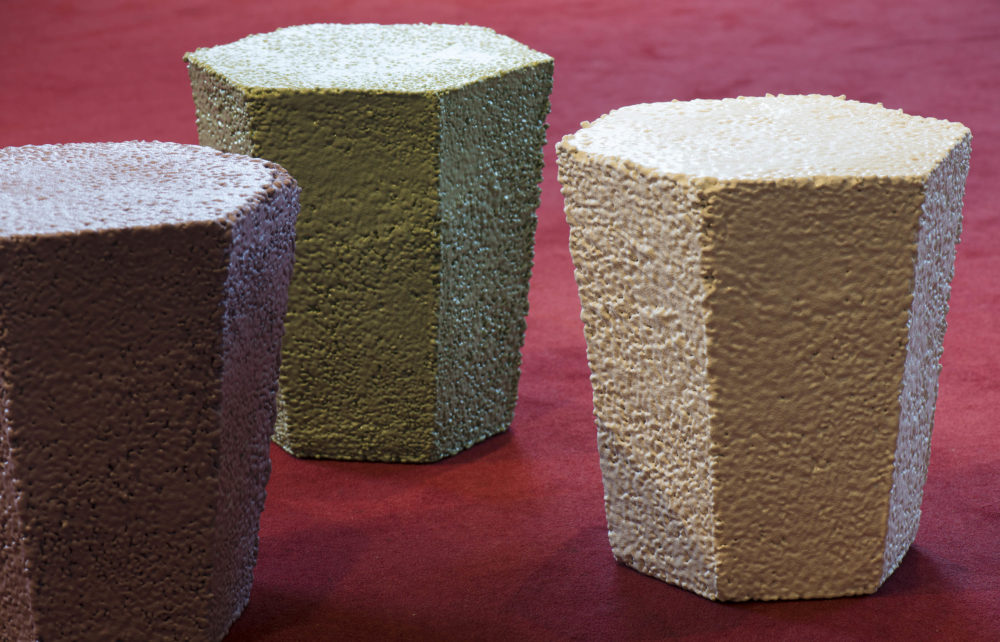 RR201 is the result of an innovative project commissioned by El Celler de Can Roca, a world-celebrated restaurant in Girona, Catalonia. Roca Recicla, (Roca Recycles) is their ambitious project to become a zero-waste restaurant with the slogan Refuse, Reduce, Reuse, Repurpose, Recycle.

Every day El Celler de Can Roca receives 6 boxes of fresh fish, delivered in white polystyrene boxes. On considering how these transportation boxes, which are notoriously difficult to recycle, could be reused, they called on their long-time collaborator, the designer Andreu Carulla.

Carulla landed on the idea of making stools. The boxes are first cleaned and then shredded and compacted into a mould using injected steam. When removed from the mould, the stool is sealed and painted with an eco-friendly coating. The result is a lightweight, highly-durable stool weighing less than 2kg. Each stool is made from one transportation box and although the same mould is used, each stool varies in texture and tone.

Andreu Carulla is a Catalan designer working in Banyoles, Spain. He established his design studio in 2006 in Banyoles, Catalonia. Carulla was awarded a Good Design Award (2019) and a Red Dot Design Award Best of the Best (2015). He was twice nominated for the German Design Award (2018/2019) and named Best Spanish Designer by Elle Deco (2012). Since 2018, they have had a UK office at Custom Lane, Leith headed by Adam Johnston, a graduate of Edinburgh Napier University.