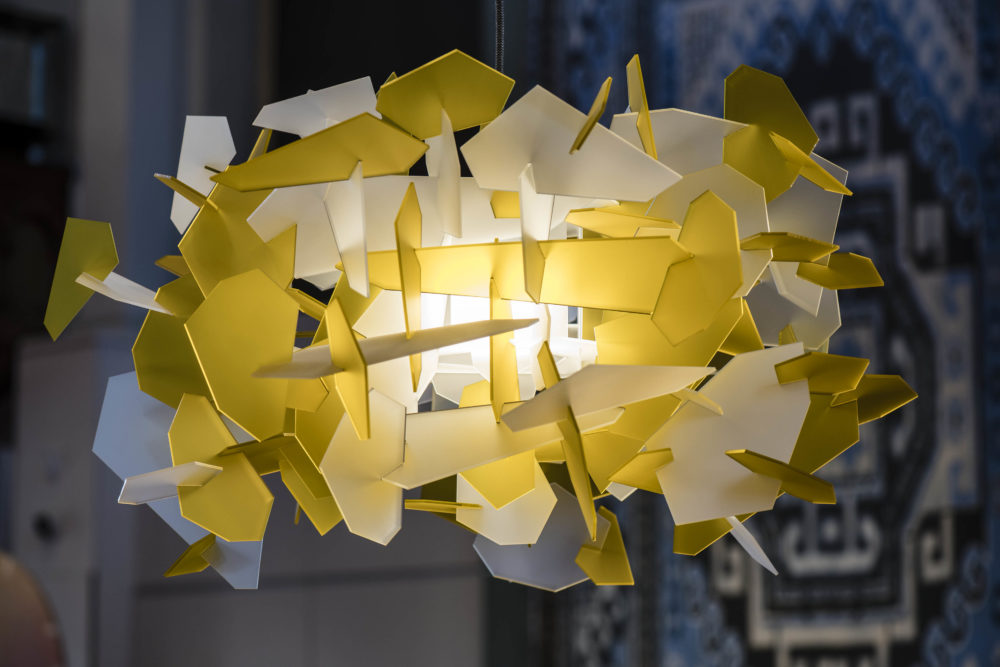 Twilight is a new series of illuminated suspended sculptures by Andrew Miller. Comprising numerous angled pieces of frosted Perspex, they grew out of a series of pen and ink drawings and Miller’s interest in sculptured forms in space.

Andrew Miller’s also shows a new light work entitled Piece. It takes the form of an irregular hexagonal shape, similar to one of the sections used in his Twilight series. The hexagonal form is repeated in six different sizes, in varying colours. Totalling 36 coloured hexagons, Piece offers countless possibilities to arrange and rearrange the various shapes and colours.

The work can either be floor-based or suspended.

For his solo show at the National Glass Centre in Sunderland in 2016, Miller created a vast wall installation, entitled Fracture, of lozenge-shaped coloured flattened forms placed along a glass wall. He went on to work on a large wall drawing which again explored forms in 2-D space. Here Miller has taken the geometric forms into the 3-D, to create a series of glowing constellations.

Andrew Miller lives and works in Glasgow. He works across a variety of media – drawing, sculpture, photography and site-specific installations. Through the process of drawing, altering, transforming and making Miller seeks to understand the ambiguity between notions of form and function. He works with the worn and the discarded, and in salvaging, reassembling and re-presenting familiar objects he asks questions about the way things are placed, valued and used. Miller studied at The Glasgow School of Art between 1988 and 2003. Solo shows include: Stallan Brand, Glasgow (2019) Sixes and Sevens, Inverleith House, Edinburgh (2007); Dusk or Dawn, Baltic 39, Gateshead (2012) and The Good, The Bad and The Ugly, National Glass Centre, Sunderland (2016). In 2016 Miller took part in the Yinchuan Biennale, China.