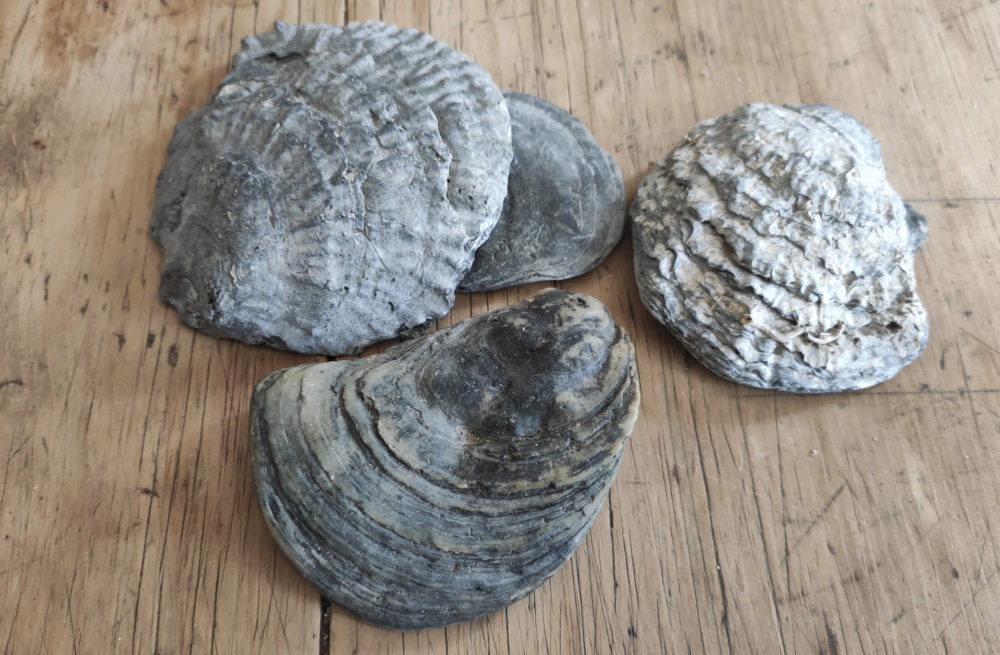 As plain and decorative plasterers, we have long been interested in exploring traditional trade skills. Much of our work involves adapting traditional techniques to produce contemporary designs – we are fascinated by the history of the plastering trade. Our creative practice is as much rooted in research, texts and archives as it is in contemporary arts and crafts.

Recently we have been focusing on the materials we use within our practice. Traditionally, plasterers played a much more active role in the production of materials than they do today. Until the mid-19th century, many Scottish plasterers made their own casting plaster or gypsum in ‘stucco stoves’. Within their workshops, they crushed, ground and baked gypsum plasters when required. No one makes their own casting plaster anymore – but there really is something special about creating your own materials. Not only do you gain a more intimate understanding of the material but you see it as infinitely more ‘precious’.

We are lucky to be working on two material-focused projects during the lockdown, both inspired by historic vernacular practices. The first focuses on the Forth oyster. The Firth of Forth was once home to enormous oyster beds, or scalps. The scalps ran from Hound Point on the southern shore of the Forth in West Lothian to Gosford in East Lothian, and stretched north across to Aberdour and Burntisland in Fife. In total the Forth oyster scalps covered an area of roughly 50 square miles. Archaeological finds show that we have been harvesting the Forth oyster scalps as a food source since at least 3300 BC. And by the 1790s it is thought that as many as 30 million oysters were harvested from the Forth in a single year. Although it was increasingly recognised that this level of exploitation was unsustainable, efforts to counter over-harvesting failed time and time again. The Forth oyster population went in to terminal decline and the 1882-83 season saw only 55,000 oysters landed. The following year that number had fallen to just 6,000. A decade later the catch came to a meagre 1,200. The Forth oyster population was finally declared extinct in 1957.

In 2009 there was a tiny glimmer of hope when researchers discovered a small population of oysters in an undisclosed location in the Forth. Even so, it seems unimaginable that the oyster population will ever recover to previous levels. For us, the story of the Forth oyster is a poignant one. It is a story that we can learn from and one that deserves to be more widely known.

Oyster shells are composed of calcium carbonate, the same as limestone, and there is a long history of burning oyster shells to produce construction materials such as lime mortars and plasters. There are building accounts dating back from 18th century Edinburgh that describe oyster shells being burnt and used to produce internal plasters. In some parts of the world, oyster shell quicklime is mixed together with crushed shells and ash to produce ‘tabby concrete’ which was used in a similar way as shuttered concrete today.

Over the past year we have been collecting Forth oyster shells, which probably date from the 19th century, washed up on our local Fife beaches. So far we have managed to gather together over 70kgs. Heating these oyster shells at the right temperature can be a little bit tricky so we have been practicing with farmed Pacific oyster shells kindly provided by Loch Fyne Oysters Ltd. We have been experimenting with simple oyster bricks but once confident that we can consistently achieve the right temperatures, we will begin burning Forth oyster shells and use the material we produce to create a series of contemporary works.

The second project we are working on also looks to the Forth: making plaster from seawater. Most modern plasters are made from mineral gypsum (calcium sulphate dihydrate). Casting plaster, or plaster of paris, is simply ground mineral gypsum which is cooked until it looses half its water content. As an evaporite mineral, most geological sources of gypsum were formed by the evaporation of seawater. Although it is a very common mineral, Scotland does not have any viable geological deposits and has always relied upon imports – records reveal imports dating back to the early 16th century. However, large quantities of gypsum have been produced in Scotland for centuries as a by-product of traditional salt panning.

The Scottish coast was once lined with numerous saltpans – places where salt was produced by heating sea water – such as St Monan’s and Culross in Fife and Joppa to the east of Edinburgh and Prestonpans in East Lothian, before the industry collapsed in the early 19th century. The traditional process involved evaporating large quantities of seawater in huge iron pans which could be up to 18ft in length. The process was a complex one and it usually took around 24 hours to harvest salt from when the pan was first filled. Part of the process involved using egg whites to remove any impurities in the water but despite this, salt-makers found that a white sand-like substance would form in the bottom of the saltpan during the evaporation process. One mid-18th century writer described this mysterious substance as a ‘subtile white earth’ but it wasn’t until the beginning of the 19th century that it was recognised as gypsum.

Thanks to funding through Creative Scotland’s Visual Artist and Craft Maker Award in partnership with Fife Contemporary and Fife Cultural Trust, we are now making gypsum from seawater collected from the site of a 18th century saltpan at our local beach. It is a long tricky process and we are still finding our way but we are beginning to see some progress. Gypsum produced in this way has some fascinating quaities and we are looking forward to exploring its creative potential.