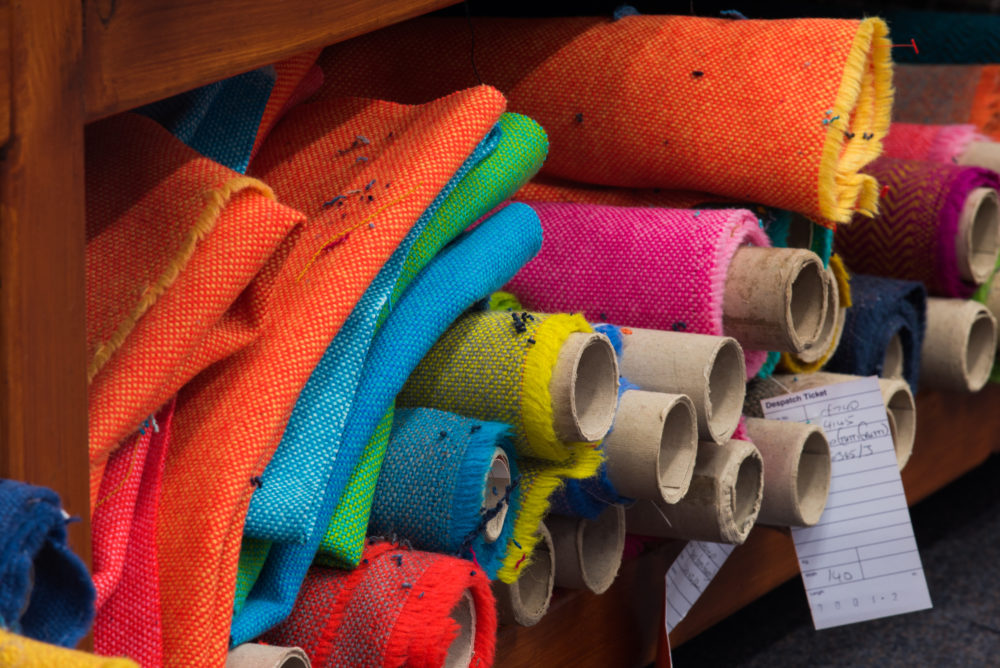 Bute Fabrics is an internationally renowned designer and manufacturer of woven fabrics, whether bespoke for hotels such as The Principal York hotel, or for large scale projects such as the auditorium in Foster + Partners’ Sage Gateshead; the refurbishment of the Royal Bank of Scotland London, or purchased by the metre to furnish or style domestic interiors. Their bold, vibrant, tactile fabric collections are inspired by the colours, textures and patterns found in the moorlands, verdant rolling hills and native forest landscapes and the lichen-flecked stony shorelines of the Isle of Bute. Bute Fabrics’ specialist team of 46 including apprentices – many are from the local area and generations of the same families – have continuously embraced innovation, whether incorporating CAD into production, producing technically advanced durable textiles or in design-led collaborations with influential creative companies and individuals.

Bute is one of the most accessible westerly islands of Scotland. Located in the Firth of Clyde, it is 33 miles as the crow flies west of Glasgow. Rothesay, the island’s chief town can be reached via a CalMac ferry, the distinctive and familiar red and green livery itself a visual treat – and foot passengers get to embark at the A-listed Wemyss Bay train station on the mainland. The station we see today, with glazed roof canopies above the circular concourse and sweeping ferry walkway, was built in 1903 in the Edwardian style by the Caledonian Railway Company. It was restored in 2016 with support of the Friends of Wemyss Bay Station. The combined ferry and train timetable allow ample transfer time between modes of transport to imagine the throngs of yesteryear holidaymakers from Glasgow escaping the grime of ‘Dear Green Place” to take in clean, fresh sea air in one of the Clyde’s favourite resorts.

Rothesay’s textile history took off in 1779 when it became a centre of the cotton industry with the establishment of Scotland’s second cotton mill in a former flax mill, spurring the opening of a number of smaller mills. Located at the entrance to the Clyde, where the waters are deep enough for ocean-going ships to navigate, Bute was well positioned to receive raw cotton from America. Its damp climate was vital in preventing the spun cotton thread from breaking and there was ample water to power the mill machinery. By 1855 Bute Museum states there were 43,00 spindles and over 1,000 looms on the island, and the Bute, Rothesay, Old Corn Mill entry on Canmore (Historic Environment Scotland’s online archive) records five mills in the town. By the 1880s the island’s cotton industry had died out. This was due to the reduced exports of raw cotton from America as a result of the Civil War in the 1860s and competition from mills in Renfrewshire – accessible after dredging the River Clyde – and Lancashire.

Isle of Bute Industries, the predecessor of Bute Fabrics, was founded in 1947 by the 5th Marquess of Bute (1907-1956). On his return from serving in the Royal Navy during the Second World War, he established a mill in Rothesay to revive the island’s cotton industry with the sole purpose of providing employment and accommodation for demobbed service personnel. Descended from King Robert II of Scotland, the Bute family, one of Scotland’s most illustrious, lived at Mount Stuart – a vast Victorian Gothic mansion on the island designed by Robert Rowan Anderson who also designed the Scottish National Portrait Gallery in Edinburgh – had long embraced innovation. Under the directorship of the Marquess and his heirs, Bute Fabrics has thrived and survived. Recognising the work of artists and designers, the Marquess began the restoration and rejuvenation of Mount Stuart. Today Mount Stuart is a heritage destination that since 2001 has presented a notable programme of contemporary visual arts, commissioning, among others, Martin Boyce, Lucy Skaer, Christine Borland, Moyna Flannigan and Nathan Coley to create new works and exhibitions, under the direction of Sophie Crichton Stuart.

Originally a supplier of fabrics to the upholstery and fashion trades – including Knoll, Herman Miller and French couturiers – Bute Fabrics’ business model has shifted through the decades in response to local and international markets. They currently design and manufacture cloth on dobby and Jacquard looms for contract trade, to clients’ specifications and for sale direct to customers via The Bute Atelier. Bute Fabrics are keen collaborators with contemporary designers, artists and companies who share their vision to push the boundaries of fabric design whilst embracing tradition and innovation, community and environmental sustainability.

The London-based Tom Dixon Studio and heavyweights in the design world are on-going collaborators with Bute Fabrics. The previously realised unique colour ways for Bute’s Storr, a chunky boucle fabric collection. Over the past two years they have worked closely to develop the Studio’s first range of textured textiles to upholster furniture for Design Research Studio’s international architectural and hospitality projects. In the ‘Textiles’ Arch of the Touchy Feely interventions at their Coal Drop’s Yard HQ at last year’s London Design Festival, the Studio previewed the new fabrics. They included Micro Boucle, a smooth wool-silk nep, and a Denim, a heavy duty cotton and wool blend twill. The new collection is due to be launched this year. As with a number of Bute Fabrics’ collaborations, their extensive archive of master fabric samples featured heavily in the inspiration, concept and narrative of the unique, environmentally conscious Tom Dixon Studio fabric range, inspired by the texture’s and hues of natural elements on the island including seaweed and moss. Read more about the collaboration and the partners shared mutual respect for quality, craftsmanship, heritage, environment, design principles and community in Bute Fabric’s Studio Insight: Tom Dixon Studio.

Inspired by their love of remote surf spots along Scotland’s coastal highlands and islands, the value of tradition and innovation, and in pursuit of better made, longer lasting, more sustainable products, British surf clothing company Finisterre, founded in 2003, swiftly established an affinity with Bute Fabrics. The collaboration resulted in the bespoke coastal inspired plaid of the 100% merino wool Isle of Bute Blanket in Finisterre’s autumn 2017 collection. Like Bute Fabrics, collaboration is a familiar tool in B-Corp certified Finisterre’s toolkit. Earlier this year they launched the Finisterre x Natural History Museum clothing and accessories collection made from recycled and organic materials. Drawing on the texts and drawings of pioneering scientists such as Charles Darwin in the Museum’s collection, the collaborators shared a vision of sustainability and protecting the future of our planet.

Bute Fabric’s latest collaborator is artist Ilana Halperin. Her solo show at Mount Stuart, There is a Volcano Behind My House was due to have opened earlier this year, has been postponed to 2021. The exhibition comprises four physical strands: sculptures, works on paper and textiles corresponding to the geological context of the island and the geological materiality both the interior and exterior of Mount Stuart, as Halperin writes:

“The first time I visited Mount Stuart, many years ago, I was struck by the deep geologic nature of the house, from the core samples of marble which travelled up from Sicily – immigrant rocks settled in their new home; to the petrified seas found in the fossil rich limestone of the vast stairwell in the Great Hall. It was as if the house itself was an Anthropocene phenomena, among the many geologic wonders one could encounter on the island.”

Inaugural Artist Fellow at National Museum of Scotland (2013), the New York-born Halperin explores the relationships between geological phenomena, human histories and daily lived experiences. Halperin’s international fieldwork and research with mineralogists, geologists and vulcanologists at geologically significant locations, results in site-responsive or site-specific works. Working in drawing, performance, writing, printmaking and film, Halperin graduated from The Glasgow School of Art’s Master of Fine Art course in 2000, and now lives between Bute and Glasgow. Indeed, it is the Suidhe volcano, on the Highland Boundary Fault Line which bisects the Isle of Bute and runs behind Halperin’s island home, that is referenced in the exhibition’s title.

Halperin’s work is informed, in this instance, by the specific geological phenomena she has encountered on Bute and within Mount Stuart and the estate: the mica on the drawing room ceiling, remnants of bricks and tiles from the former Victorian brickworks in Kilchattan Bay washed up on the shore and stalactites growing from the lime-rich plaster in the Boathouse. Halperin’s two textile works are the artist’s first works in fibre and were woven on Jacquard looms. The colour palette is informed by watercolours made after island walks. They pay homage to shades of rocks, hills and sea, which she reflects are similar to her knitwear-designer mother’s textile samples from the 1960s to the 1980s. The artist’s recognisable marks on the textile works are informed by the island’s formation along the fault line.

The fabric had just been released by Bute Fabrics’ finishers when lockdown happened and installation halted. The textile works were to be displayed in the bedrooms at Mount Stuart, prompted by an in-depth textile focused walk Halperin had with Sophie Crichton Stuart, to understand where textiles would have been encountered in the everyday life of the house. They identified a location where a now lost silk wall hanging once hung. The hanging fixtures remain and Halperin will once again make use of them.

In Halperin’s ‘My Conglomerate Family’ text in her Geologicnotes, the artist draws on a series of watercolours of the same name exhibited in Excerpts from the Library, an online exhibition curated by her Glasgow gallery, Patricia Fleming Projects. Here she reflects on people, place and politics at a time of eruption, both volcanic and viral. It is a timely read.

Helen Voce is an independent producer working locally, nationally, internationally and voluntarily in the creative industries. Her professional specialism and personal interest is in contemporary craft and design in Scotland, the UK and beyond. Current projects include the MAKE Manifesto, Make Works Scotland, mentoring for Vanilla Ink and Craft Scotland, the Tanween Development Programme at Tashkeel in the UAE, plus professional development projects for Applied Arts Scotland. Former clients include Cove Park, Crafts Council and Firstport.