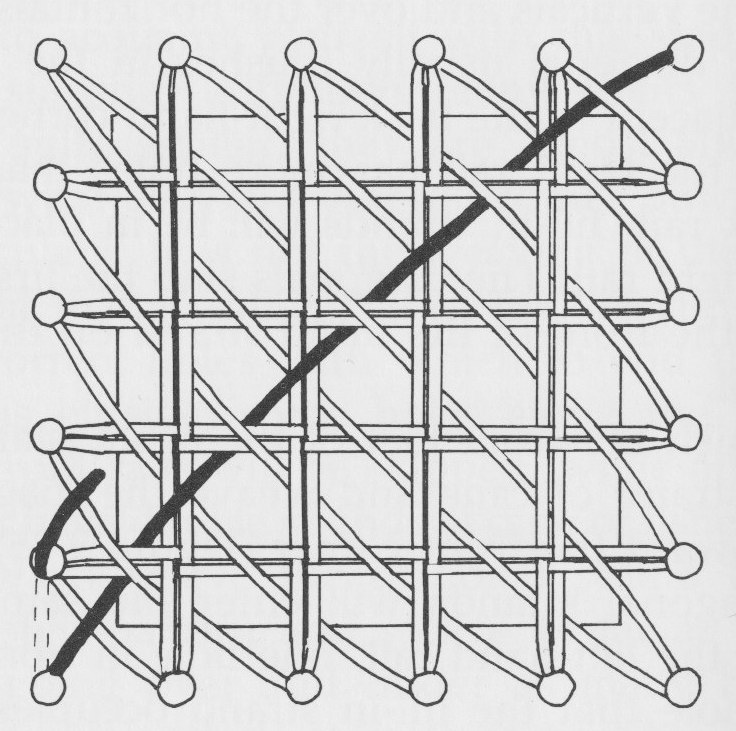 It is late afternoon – the window at the west of the room sees the last of the sun – the rattan lights up yolk yellow by it, and prompts me to work, kneeling, into the gloaming. I have been learning to cane.

The process involves interlacing strands of flexible cane across a chair’s seat or back, creating a woven lattice which is held in place by holes in the frame. The source of cane is the barbed rattan palm. The species most suitable for chair-caning, Calamus Caesius, grows in Southeast Asia and Indonesia.[1] Chinese traditions of canework can be traced as far back as 250 BC, when the six-way pattern, which I am learning, was in use. The history of cane in the West is inextricable from empire. Cane came first to the UK via the East India Company, where it was bundled and used as ‘dunnage’ to pack and secure fine goods, such as tea and spices, while in transit. Basketmakers in the London saw the chance to use this ‘waste material’ in a similar way to willow, given their shared characteristics, and by 1660 it was a fashionable choice.[2] [3] The six-way pattern (also called ‘Bergère,’ or the seven step method) comprises a grid of verticals and horizontals, two strands in each hole, followed by single lengths of diagonals in both directions, diagonals described by English chair caners as ‘going from ‘Liverpool to London’ and from ‘York to Yeovil.’’ [4]

There is a warp and a weft, as in fabric weaving. However, the tension that is set in to thread when weaving cloth is released somewhat when the work is taken off the loom. Here, though, the structure that holds the tension remains. This is facilitated by the holes around the perimeter of the seat, a development that probably emerged separately in both Egypt and Southeast Asia. The earliest precedent for this is in my favourite chair, the Theban chair from the New Kingdom period in Ancient Egypt (c. 1570- c.1069 BCE). I found it referenced in this study[5] and it was like being greeted by an old friend. Of course. It is lovely, playful, and earnest, and its seat is made up of woven string strung through holes at the frame.[6] In caning, tension comes from the continued interaction of the frame, diagonals, and the warp and weft, or my preferred, softer derivation of weft, ‘woof’. You don’t have to yank so hard on it, Kate.

It is the sort of work that I need in this solitary period. The cane speaks more than I do: it is shiny and smooth on one side, the outer ‘bark’, where nodes and grain patterns remind you it is a palm. It is pliant – when relaxed in water and flexed. It has great tensile strength, but is also sometimes brittle – lots of dark parallel lines, across the grain and close together, indicate this. The underside is porous; has hairs that flick out and split, that catch the woof and break. If it is wet too much, or the water is too cold, and you thread it through against the grain, it becomes a true dog’s breakfast. I think the material is disobedient, but actually it’s me – I am not listening to it. In caning, the work is dictated by the structure of the craft, and by the bounds and boons of the plastic characteristics of the material. Here, there is a certain giving-over to matter that I am drawn to, especially now. Anni Albers describes the crafts ‘as conventions of treating material, (which) introduce another factor: traditions of operation which embody set laws.’[7]It is – as with anything – a question of balance. Of geometric balance and of balance of control. ‘Material is a means of communication…listening to it, not dominating it makes us truly active, that is: to be active, be passive.’[8]

Pull too sharply when the cane hasn’t been flexed pliant, or has dried a little, and it snaps. You swear and the room hears it. When you start, on those first few steps, the cane is kept dry and is as loose as anything, you are merely laying cane over cane – no weaving is involved.[9] Once you begin actually weaving, tension builds – it is not something that you are adding. It sets it on its own. It speaks.

Last winter Katie and Isobel taught me how to darn. As with darning, there are no knots in canework. We have this tendency to tie things up. To think that every loose strand needs fastening down. (‘Batten down the hatches!’) But that’s not the case. When you darn a hole, you are building a web – it is like a scab forming over a wound, its edges are not clear cut, it only builds itself. It is concerned with just its own inherent structure and stability, and only then finds inlets into the fabric around it; soft edges and vowels and &s of thread that help pin it in position.

The cane is set up, warp and woof in place, and then the diagonals start to go in, creating the distinctive octagonal gaps between the cane. The process of making is one of building planes, flat surfaces, not one of object making. For me, object making feels a bit abrasive at the moment, a bit contrary. I occupy myself just with the creation of these planes (spanning gaps between things), with temporary object making (fruit tarts and bread), and with writing.

In this period of deep anxiety and uncertainty, yielding to plastic, talkative matter feels natural and comforting. A giving-over to a haptic learning of rules that are timeless and tangible. ‘It is this knowledge that rules are the nature of nature, that chaos is senseless, that is thus transmitted to and through a work that is art.’[10] For ‘the rules’ to be something you can uncover just by use, by feel, and with time: to yield to days in conversation with matter.

A month ago, the chair I bought on eBay arrived at my front door. I unwrapped it and the frame was empty. Now, even though I am not yet finished (I am taking my time), there is a flat, woven plane there, where before there was nothing. I have already used it, absent-mindedly, as quiet holder of tools as I work. Surface has materialised. It takes weight. It supports. It allows release.

Kate Morgan’s practice spans visual art, furniture making and writing. Her functional and conceptual object making employs and questions the techniques and specific language of traditional furniture making. Her writing is observational, focused on living, making, objects and food. Recent publications include ‘Pointing,’ (An Organ of Tin Beetle Books,2020), ‘A thing or two I know about breakfast, or how to cook baked beans.’ in Fortified Issue 2, (ed. by Sinae Park, 2019) and ‘The Flying Freehold’ (2019). She exhibited A Bench for ‘The Universal Holding Device’ at DES 2019.