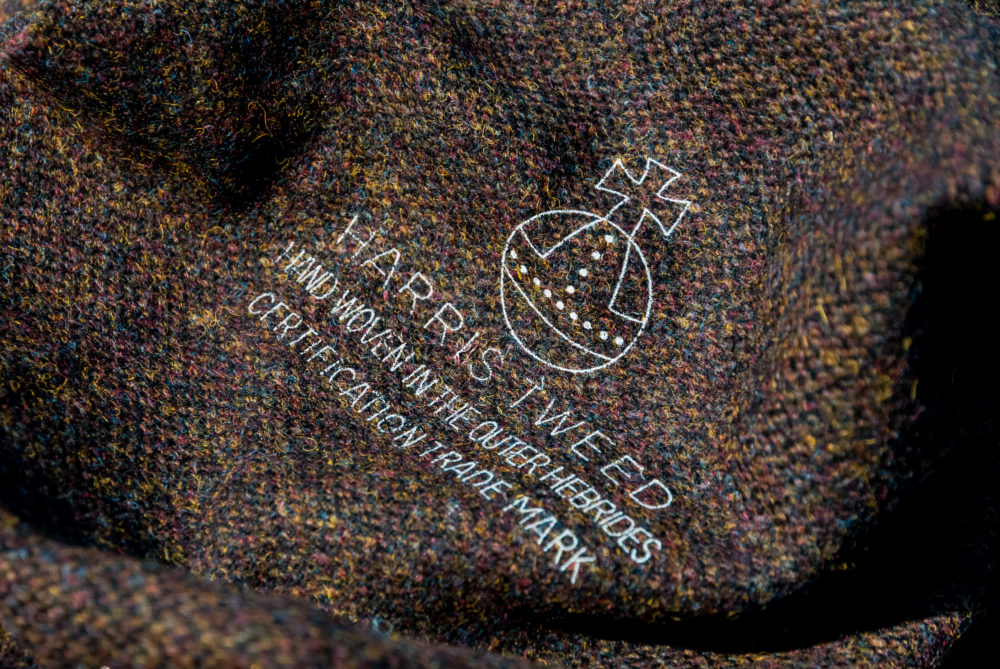 The sight, sound, smell and touch of moorland, shorelines, hills, sea and Machair of the Outer Hebrides; their intersections and horizons are up-lifting. The first-hand sensory experience remains with you, recollected when envisaging wide open space, calm and the power of the elements.

We limit our movement to reduce the spread of Covid-19, to protect communities and importantly Scotland’s island communities. Whilst we adhere to Scottish Government guidance, yet eager to travel when again possible, how can we have a Hebridean experience? Harris Tweed must be the answer.

The striking pinks of the summer flowering Bell heather, the constantly shifting blues and greens of the sea crashing on the white sand shores, earthy greys and vivid yellows of lichen on rocks, deep browns in freshly cut peat stacks and prominent purples of orchids in the Machair: the Hebridean colour palette are mirrored in Harris Tweed. These simplistic descriptions do not do justice to the infinite shades, hues and tones achieved in the cloth through the expert hand blending of dyed wool, spun into yarn, which weavers combine into plain, twill or herringbone weave structures.

In this episode of Travels by Design, I explore the clò-mòr or the ‘big cloth’, and the skill and dedication of the people and communities committed to making, preserving and protecting Harris Tweed. The only commercially available worldwide, handwoven fabric made from 100% British wool, Harris Tweed is naturally renewable and biodegradable. It is durable, non-allergenic and does not require additional finishes to be moisture resistant, breathable, wind and waterproof. If you have a swatch or item made of Harris Tweed, have it close by whilst reading this, and contemplate the depth and breadth of colour and expertise in its making.

Today Harris Tweed is woven on hand looms by weavers in their homes, often in weaving sheds. Recorded as 226 in December 2018 by The Heritage Crafts Association, weavers on the Outer Hebridean islands of Lewis, Harris, North & South Uist, Benbecula and Barra, work with a strong yarn, carded and spun at one of three mills on the islands. Pure virgin wool is blended from the soft and coarse fleeces of Cheviot and Blackface sheep, respectively from the islands and mainland. It is dyed using low-impact volatile organic compound dyes. The ‘greasy cloth’ is then returned to the mill for finishing; correcting flaws, washing to remove dirt, oil and impurities before being dried, steamed, pressed and cropped.

The three mills are all on Lewis:

Harris Tweed Hebrides, at Shawbost on the north west coast produces 75% of all Harris Tweed

Kenneth Mackenzie, in Stornoway and is the island’s oldest operational mill dating from 1906

Carloway Mills, the smallest of the three, in the village of Garenin in Carloway on the west coast

An independent statutory body created by the Act, the Harris Tweed Authority (HTA) ‘guardian of the orb’ is charged with protecting Harris Tweed as a local asset of the communities of the Outer Hebrides. The HTA champions the industry as a livelihood for islanders, safeguards its name and quality, promotes its international profile and protects the cloth against infringement of intellectual property. In the cloth’s final stage of production, HTA inspectors examine every metre in the mill. If satisfied that it meets the required standards, a beeswax seal of the familiar ‘Orb’ trade mark is heat pressed on to the reverse of the cloth’s selvedge.

Whether stamped directly on to Harris Tweed or featured on labels, the Orb is a certification mark registered by the HTA, that gives ‘…a guarantee that the goods or services bearing the mark meet a certain defined standard or possess a particular characteristic.’ Beneath the Orb – a globe surmounted by a Maltese cross studded with 13 jewels, the words ‘Harris Tweed’.

‘a tweed, hand spun, hand woven, and finished by hand in the Outer Hebrides with ‘Made in Harris’, ‘Made in Lewis’, or ‘Made in Uist or Barra’, etc added as appropriate.’

In the Association’s first 25 years, the Harris Tweed industry navigated mechanical developments, production issues and the conflicts of producers. This included the weavers use of yarn spun on the mainland, establishing mills on the island to card and spin wool for weaving in-house and plans to establish a network of mills on the islands to undertake all manufacturing processes. The latter presented serious economic consequences for weavers in remote communities. The Association’s resulting amendment to the definition of Harris Tweed in 1934, protected weavers and went some way to satisfying the spinning mills, but did not go unchallenged:

‘Harris Tweed means a tweed made from pure virgin wool produced in Scotland, spun, dyed, and finished in the Outer Hebrides and Hand-woven by the Islanders at their own homes in the Islands of Lewis, Harris, Uist, Barra and their several pertinences, and all known as the Outer Hebrides.’

Islanders had woven tweed cloth by hand for centuries. Originally woven by crofters for their own use, the cloth was durable and provided protection against the elements. Traditionally fleeces were shorn from the crofters’ sheep, hand washed in the islands soft, peaty waters and coloured with natural dyes made from local plants and lichen or crotal in Gaelic. Then it was carded and spun into yarn for hand weaving. The cloth was a currency for the islanders, traded and bartered to pay rent, for example. By the end of the 18th century, hand woven cloth made from yarn spun from local fleeces was a staple industry for crofters, the cloth being exported along with hides to the mainland.

The beginnings of Harris Tweed as an industry, emerge in the early 19th century under the patronage of Lady Dunmore, who HTA describe in their online journal, as ‘the woman who brought Harris Tweed cloth to the world’. On the death of her husband, the 6th Earl of Dunmore in 1845, Lady Dunmore inherited the North Harris Estate. At a time of religious disruption and famine, Lady Dunmore’s initiatives supported many of the island’s communities. She commissioned the skilled Paisley Sisters from the village of Strond (named after the town of Paisley, where they trained) to weave cloth in the Murray tartan to clothe the Estate’s gamekeepers and ghillies. She also introduced tweed to friends in Edinburgh and London as an ideal cloth for hunting and sporting attire. Lady Dunmore further invested in cloth production, by funding young women to travel to the mainland to train. By the late 1840s, British merchants were supplying hand woven Harris Tweed to the landed gentry and aristocracy.

Whilst Lady Dunmore is sometimes seen as the philanthropic matriarch of Harris Tweed, the Dunmore family were instrumental in the Clearances on Harris. In Highland Clearances of the Isles of Lewis and Harris, writer and campaigner, Alastair Mcintosh who was born and raised on Lewis, quotes the writings of Donald J MacLeod, originally from the village of Enaclete in Uig, evidencing clearances of South Harris in 1839 by the 6th Earl of Dunmore.

This is omitted from the Early History of Harris Tweed in Angus Macleod’s archive, available online and accessible at Ravenspoint Centre, Kershader on Lewis. Born in Calbost on Lewis in 1916, Macleod was a crofter, seaman, founder of the Scottish Crofting Union and a manufacturer and buyer of Harris Tweed. His archive reflects his passion for the Outer Hebrides, documented in letters, manuscripts and photographs. Originally titled ‘Notes on the Clò Mòr Industry’, Angus records ‘… some of the people who left their mark on the Hebrides and who deserve better than to be forgotten’ brings to life the people of the industry.

Whilst mechanisation came to mills on the mainland during the industrial revolution, the tradition of hand weaving continued on the Outer Hebrides. Treadle powered small wooden looms, beart bheag in Gaelic, were used until c.1900, and ‘beart mhòr’, big loom in Gaelic, from the turn of the 20th century. Developed to replace the wooden loom, George Hattersley and Sons of Keighley, West Yorkshire launched the treadle powered Hattersley Domestic Loom in c. 1900. According to the Hattersley Loom Club, the first looms arrived on the Outer Hebrides in 1919. The semi-automatic loom enabled injured First World War soldiers to weave and therefore make a living.

Working from home, today’s weavers are self-employed, weaving either for the mill or independently. Weaving cloth to the mill’s instruction, weavers work on pedal powered double width Bonas Griffith rapier looms with beamed warps and yarn supplied by the mill, returning the cloth to the mill for finishing and sale. Working with spun yarn purchased from the mill, independent weavers create cloth to their own design on single-width Hattersley looms, finished at the mill and returned to the weaver to sell. Here are the stories of two weavers:

Born in 1909, the same year as the formation of the Harris Tweed Association, Marion Campbell BEM began weaving at 14, and at 21 won a design award in a competition run by the Association. Weaving into her eighties, Marion continued to oversee and conduct all processes involved in weaving Harris Tweed in a traditional way, as seen in a wonderful collection of photographs compiled by her family who run Harris Tweed and Knitwear. A keen ambassador for Harris Tweed, she received an BEM in 1985, and is remembered in an exhibition of her work at Drinishader Primary School, where she once went to school and in ‘A Harris Way of Life’ a biography by Gisela Volger.

Donald John Mackay MBE has been weaving for over 50 years, absorbing his weaving skills from his father. On leaving school, Donald John moved to Luskentyre to assist his recently widowed aunt with the croft’s land and livestock. Needing a job that would fit around these commitments, he was given by his aunt a Hattersley loom. In 1991 he established Luskentyre Harris Tweed Company with his wife, which initially focused on the independent production of tartan tweeds which no one else was producing at the time. Enduring the rise and fall of demand for Harris Tweed, the business took an upward turn in the early 2000s due to international orders, as Donald John Mackay shares in his interview with David Prentice on the Isle of Harris website.

In 2004 Nike placed an order for what was initially understood to be 950 metres of a bespoke tweed for the ‘Terminator’ women’s basketball shoe, popular in the 1980s, for an limited-edition relaunch. On clarification, Nike’s order was actually 9,500 metres required within the original eight-week time frame. Weaving an average of 24.5 metres a day, Donald John mobilised other island weavers to fulfil the order, which resulted in a subsequent 10,000 metres order from Nike. Orders from Clarks and Converse followed introducing Harris Tweed to a new younger audience bringing work to the weaving sheds of Luskentyre and others.

Recognising the centuries-old weaving tradition, in 2018 the Outer Hebrides was designated a World Craft City by UNESCO in the World Crafts Council’s network of 46 Craft Cities. The Outer Hebrides complements Scotland’s other UNESCO Creative Cities of Dundee City of Design, Edinburgh City of Literature and Glasgow City of Music.

If your swatch or item made of Harris Tweed is yet to prompt your Hebridean memories, or you are yet to visit the Outer Hebrides to create them, then trigger your senses with HTA’s short film, The Big Cloth. And whilst online, enjoy the following films by and about those preserving, promoting and protecting Harris Tweed:

And, take a moment to learn Gaelic words pertinent to the weaving of Harris Tweed, including clòimh and fighe, with Rebecca Hutton of Taobh Tuath Tweeds in HTA’s Harris Tweed Words shorts.

Helen Voce is an independent producer working locally, nationally, internationally and voluntarily in the creative industries. Her professional specialism and personal interest is in contemporary craft and design in Scotland, the UK and beyond. Current projects include the MAKE Manifesto, Make Works Scotland, mentoring for Vanilla Ink and Craft Scotland, the Tanween Development Programme at Tashkeel in the UAE, plus professional development projects for Applied Arts Scotland. Former clients include Cove Park, Crafts Council and Firstport.